Below Is The Narration Of The Video
​ When you enter the Rotunda, you'll be greeted to a statue and memorial honoring The American Revolutionary War, which was fought from 1775 to 1783.

Also known as the American War of Independence, the Revolutionary War began with the confrontation between British troops and local militia at Lexington and Concord, Massachusetts, on 19 April 1775.

The conflict arose from growing tensions between residents of Great Britain’s 13 North American colonies and the colonial government, which represented the British crown.

In 1775, when the American Revolution began, there was no regular army. Instead each colony defended itself with a militia made up of local men. With few exceptions, any male 16 or older was expected to participate in the militia. By 1776 Washington had an army of 20,000 men. About one-third came from colonial militia groups, and two-thirds were regular army.

France entered the American Revolution on the side of the colonists in 1778, turning what had essentially been a civil war into an international conflict. After French assistance helped the Continental Army force the British surrender at Yorktown, Virginia, in 1781, the Americans had effectively won their independence, though fighting would not formally end until 1783.

The war had its origins in the resistance of many Americans to taxes imposed by the British parliament, which they claimed were unconstitutional. Patriot protests escalated into boycotts and the destruction of a shipment of tea at the Boston Tea Party.
The British government punished Massachusetts by closing the port of Boston and taking away self-government. The Patriots responded by setting up a shadow government that took control of the province outside of Boston. Twelve other colonies supported Massachusetts, formed a Continental Congress to coordinate their resistance, and set up committees and conventions which effectively seized power from the royal governments.

In April 1775 fighting broke out between Massachusetts militia units and British regulars at Lexington and Concord. The Continental Congress appointed General George Washington to take charge of militia units besieging British forces in Boston, forcing them to evacuate the city in March 1776. Congress supervised the war, giving Washington command of the new Continental Army; he also coordinated state militia units.

On July 2, 1776, the Continental Congress formally declared independence.[20]The British were meanwhile mustering forces to suppress the revolt. Sir William Howe outmaneuvered and defeated Washington, capturing New York City and New Jersey.
Washington was able to capture a Hessian detachment at Trenton and drive the British out of most of New Jersey. In 1777 Howe's army launched a campaign against the national capital at Philadelphia, failing to aid Burgoyne's separate invasion force from Canada. Burgoyne's army was trapped, and surrendered after the Battles of Saratoga in October 1777. This American victory encouraged France to enter the war in 1778, followed by its ally Spain in 1779.

The close of the Seven Years' War in 1763 (the French and Indian War in North America) saw Great Britain triumphant in driving the French from North America, but also heavily in debt. Taxes in Great Britain were already very high and it was thought that the American colonies should pay for the soldiers to be stationed there. Parliament passed the Stamp Act in March 1765, which imposed direct taxes on the colonies for the first time starting November 1. This met with strong condemnation among American spokesmen, who argued that their "Rights as Englishmen" meant that taxes could not be imposed on them because they lacked representation in Parliament.At the same time the colonists rejected the solution of being provided with the representation, claiming that "their local circumstances" made it impossible.

Civil resistance prevented the Act from being enforced, and organized boycotts of British goods were instituted. This resistance was by and large unexpected and "produced a violent and very natural irritation" among the British.
A change of government in Britain led to the repeal of the Stamp Act as inexpedient, but also the passage of the Declaratory Act, which stated, "the said colonies and plantations in America have been, are, and of right ought to be, subordinate unto, and dependent upon the imperial crown and parliament of Great Britain."

In 1767 Parliament passed the Townshend Act, which imposed duties on various British goods exported to the colonies. The Americans quickly denounced this as illegal as well, since the intent of the act was to raise revenue and not regulate trade.
In 1768 violence broke out in Boston over attempts to suppress smuggling and 4000 British troops were sent to occupy the city. Parliament threatened to try Massachusetts residents for treason in England. Far from being intimidated, the colonists formed new associations to boycott British goods.

In March 1770 five colonists in Boston were killed in the "Boston Massacre", sparking outrage. In 1770 Parliament attempted to appease the Americans by repealing all taxes except the tax on tea.

In 1773, in an effort to rescue the East India Company from financial difficulties, the British attempted to increase its tea sales by reducing the price of tea and appointing certain merchants in America to receive and sell it. The landing of this tea was resisted in all the colonies and, when the royal governor of Massachusetts refused to send back the tea ships in Boston, Patriots destroyed the tea chests.

Nobody was punished for the "Boston Tea Party" and in 1774 Parliament ordered Boston harbor closed until the destroyed tea was paid for. It then passed the Massachusetts Government Act to punish the rebellious colony. The upper house of the Massachusetts legislature would be appointed by the Crown, as was already the case in other colonies such as New York and Virginia. The royal governor was able to appoint and remove at will all judges, sheriffs, and other executive officials, and restrict town meetings. Jurors would be selected by the sheriffs and British soldiers would be tried outside the colony for alleged offenses. These were collectively dubbed the "Intolerable Acts" by the Patriots.

In February 1775 Parliament declared Massachusetts to be in a state of rebellion. Lieutenant General Thomas Gage, the British North American commander-in chief, commanded four regiments of British regulars (about 4,000 men) from his headquarters in Boston, but the countryside was in the hands of the Revolutionaries. On April 14, he received orders to disarm the rebels and arrest their leaders.

On the night of April 18, 1775, General Gage sent 700 men to seize munitions stored by the colonial militia at Concord, Massachusetts. Riders including Paul Revere alerted the countryside, and when British troops entered Lexington on the morning of April 19, they found 77 Minutemen formed up on the village green. Shots were exchanged, killing several Minutemen. The British moved on to Concord, where a detachment of three companies was engaged and routed at the North Bridge by a force of 500 minutemen. As the British retreated back to Boston, thousands of militiamen attacked them along the roads, inflicting many casualties before timely British reinforcements prevented a total disaster. With the Battles of Lexington and Concord, the war had begun. which would last 8 years until 1783 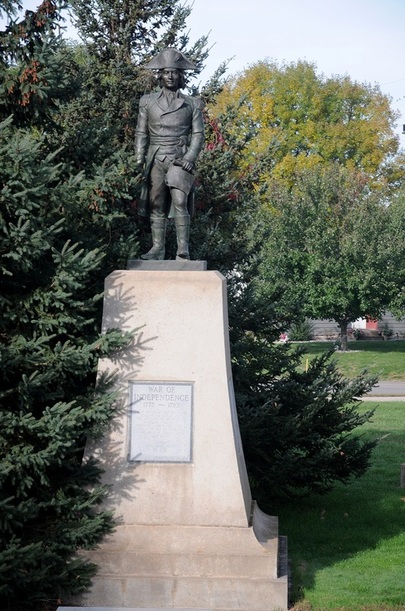 Click the image to enlarge
The American Revolutionary War
From Wikipedia, the free encyclopedia

France, Spain and the Dutch Republic all secretly provided supplies, ammunition and weapons to the revolutionaries starting early in 1776. By June 1776 the Americans were in full control of every state, but then the British Royal Navy captured New York City and made it their main base. The war became a standoff. The Royal Navy could occupy other coastal cities for brief periods, but the rebels controlled the countryside, where 90 percent of the population lived. British strategy relied on mobilizing Loyalist militiaand was never fully realized. A British invasion from Canada in 1777 ended in the capture of the British army at the Battles of Saratoga.

That American victory persuaded France to enter the war openly in early 1778, balancing the two sides' military strength. Spainand the Dutch Republic—French allies—also went to war with Britain over the next four years, threatening an invasion of Great Britain and severely testing British military strength with campaigns in Europe, Asia, and the Caribbean. Spain's involvementresulted in the expulsion of British armies from West Florida, securing the American southern flank. The British naval victory at theBattle of the Saintes thwarted a French and Spanish plan to drive Britain out of the Caribbean and preparations for a second attempt were halted by the declaration of peace. A long Franco-Spanish siege of the British stronghold at Gibraltar also resulted in defeat.

French involvement proved decisive[8] yet expensive, ruining France's economy and driving the country into massive debt.[9] A French naval victory just outside Chesapeake Bay led to a siege by combined French and Continental armies that forced a second British army to surrender at Yorktown, Virginia, in 1781. Fighting continued throughout 1782, while peace negotiations began.

In 1783, the Treaty of Paris ended the war and recognized the sovereignty of the United States over the territory bounded roughly by what is now Canada to the north, Florida to the south, and the Mississippi River to the west.[10][11] A wider international peace was agreed, in which several territories were exchanged. 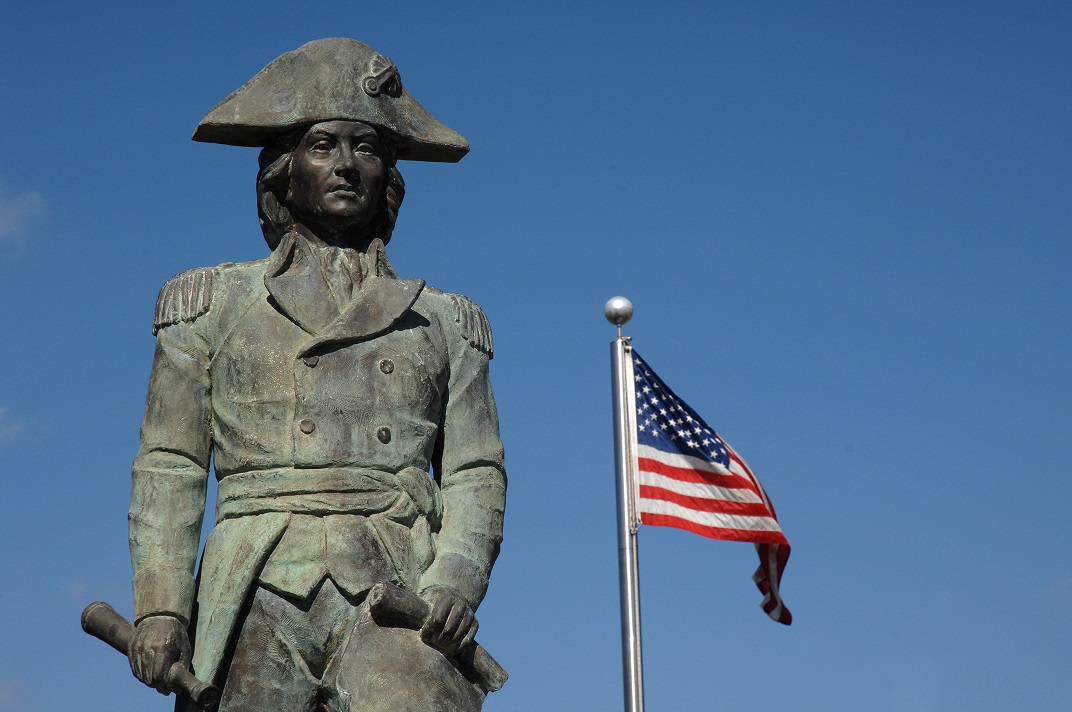