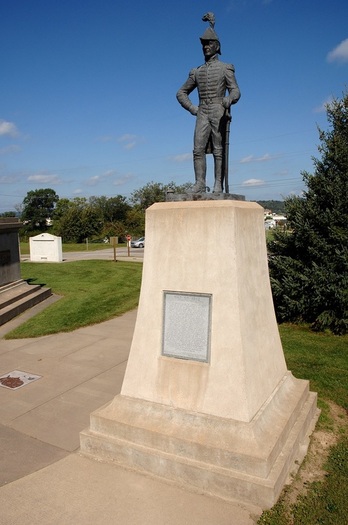 The War of 1812
From Wikipedia, the free encyclopedia

was a 32-month military conflict between the United States of America and the United Kingdom of Great Britain and Ireland, its North American colonies and its Indian allies. The outcome resolved many issues which remained from the American War of Independence, but involved no boundary changes. The United States declared war in 1812 for several reasons, including trade restrictions brought about by Britain's continuing war with France, the impressment of American merchant sailors into the Royal Navy, British support of American Indian tribes against American expansion, outrage over insults to national honour after humiliations on the high seas, and possible American interest in annexing British North American territory (part of modern-day Canada) which had been denied to them in the settlement ending the American Revolutionary War. [3]

The war was fought in three principal theatres. Firstly, at sea, warships and privateers of each side attacked the other's merchant ships, while the British blockaded the Atlantic coast of the United States and mounted large-scale raids in the later stages of the war. Secondly, both land and naval battles were fought on the American–Canadian frontier, which ran along the Great Lakes, the Saint Lawrence River and the northern end of Lake Champlain. Thirdly, the American South and Gulf Coast also saw major land battles in which the American forces defeated Britain's Indian allies and a British invasion force at New Orleans. Some invasions or counter strikes were unsuccessful, while others successfully attacked enemy objectives and took possession of opposition territory. At the end of the war both sides signed the Treaty of Ghent, and all parties returned occupied land to its pre-war owner.
With the majority of its army and naval forces tied down in Europe fighting the Napoleonic Wars until 1814, the British at first used a defensive strategy, repelling multiple American invasions of the provinces of Upper and Lower Canada. The Americans gained control over Lake Erie in 1813, seized parts of western Ontario, and ended the prospect of an Indian confederacy and an independent Indian state in the Midwest under British sponsorship. In September 1814, a British force invaded and occupied eastern Maine. This territory, along with parts of Michigan and Wisconsin, were seized and held by the British and their Indian allies for the duration of the war. In the southwest, General Andrew Jackson destroyed the military strength of the Creek nation at the Battle of Horseshoe Bend in 1814. With the defeat of Napoleon in 1814 on April 6, the British adopted a more aggressive strategy, sending in three large invasion armies. The British victory at the Battle of Bladensburg in August 1814 allowed them to capture and burn Washington, D.C, but they were repulsed in an attempt to take Baltimore. American victories in September 1814 repulsed the British invasion of New York, and the British suffered a major defeat at New Orleans in January 1815.

In the United States, late victories over invading British armies at the battles of Plattsburg, Baltimore (inspiring their national anthem, "The Star-Spangled Banner"), and New Orleans produced a sense of euphoria over a "second war of independence" against Britain.[4] Peace brought an "Era of Good Feelings" to the U.S. in which partisan animosity nearly vanished.

In Upper and Lower Canada, British and Provincial militia victories over invading American armies became iconic and promoted the development of a distinct Canadian identity which included strong loyalty to Britain. Today, particularly in loyalist-founded Ontario, memory of the war retains its significance because the defeat of the invasions ensured that the Canadas would remain part of the British Empire rather than be annexed by the United States. In Canada, numerous ceremonies took place in 2012 to commemorate the war, offer historical lessons and celebrate 200 years of peace across the border.[5] The war is scarcely remembered in Britain today, as it regarded the conflict as a sideshow to the much larger Napoleonic Wars raging in Europe.

learn about james reed, founder of trempeleau county, where soldiers walk is located.