​the avenue of heroes

COME STROLL WITH US DOWN THE AVENUE OF HEROeS

Stroll along the Avenue of Heros, which is handicap accessible, to witness exceptional memorial statues of the fighting men and women who paid the supreme sacrifice for the freedom we enjoy today. The statue figures were designed by Ron Wanek, CEO of Ashley Furniture Industries, who is also the park's lead benefactor.

​​The Rotunda depicts events and persons prior to the establishment of Arcadia, such as the War of 1812, along with a statue of Andrew Jackson, George Washington, President, 1789-1797, Brigadier Gen. Thaddeus Kosiuszko, a Polish National and a revolutionary war hero. This monument also commemorates the Polish History of Arcadia.

​All of the flower beds on the walk are measured in meters. One meter represents one year of that particular war
Learn More

​This memorial was made possible from a generous donation from David Hackley and his family.
learn more 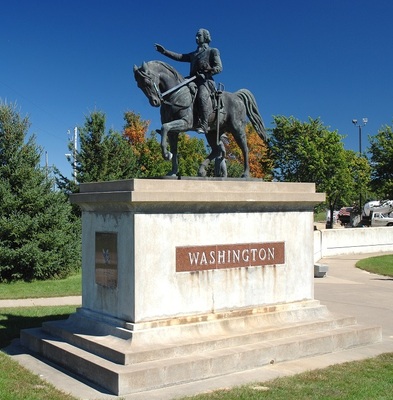 Click the image to enlarge
You can't miss the Soldiers Walk Tribute to our First President and leader of the Revolutionary War.

​In 1775, when the American Revolution began, there was no regular army. Instead each colony defended itself with a militia made up of local men. With few exceptions, any male 16 or older was expected to participate in the militia. By 1776 Washington had an army of 20,000 men. About one-third came from colonial militia groups, and two-thirds were regular army.
watch the video narration to
​this memorial here

Having recently attained independence from Spain in 1821, Mexico was fraught with internal struggles that verged on civil war. Yet In 1836 most Mexicans were relatively united in refusing to recognize the independence of Texas, which had been heavily settled by Americans. ​
learn more