Spanish American War Narration
​
The Spanish-American War (1898) was a conflict between the United States and Spain that ended Spanish colonial rule in the Americas and resulted in U.S. acquisition of territories in the western Pacific and Latin America.  The war ended with the signing of the Treaty of Paris on December 10, 1898. As a result Spain lost its control over the remains of its overseas empire -- Cuba, Puerto Rico, the Philippines Islands, Guam, and other islands.

The war originated in the Cuban struggle for independence from Spain, which began in February 1895. Spain’s brutally repressive measures to halt the rebellion were graphically portrayed for the U.S. public by several sensational newspapers, and American sympathy for the rebels rose. . But sentiment to enter the conflict grew in the United States when Spain's commanding general on the island  began implementing a policy of Re-concentration that moved the population into central locations guarded by Spanish troops and placed the entire country under martial law in February 1896.The growing popular demand for U.S. intervention became an insistent chorus after the unexplained sinking in Havana harbor of the battleship USS Maine, which had been sent to protect U.S. citizens and property after anti-Spanish rioting in Havana.

War actually began for the U.S. in Cuba in June when the Marines captured Guantánamo Bay and 17,000 troops landed east of Santiago de Cuba. At that time Spanish troops stationed on the island included 150,000 regulars and 40,000 irregulars and volunteers while rebels inside Cuba numbered as many as 50,000. Total U.S. army strength at the time totaled 26,000, requiring the passage of the Mobilization Act of April 22 that allowed for an army of at first 125,000 volunteers (later increased to 200,000) and a regular army of 65,000. On June 22, U.S. troops landed at Daiquiri where they were joined 5,000 revolutionaries.

U.S. troops attacked the San Juan heights on July 1, 1898. Dismounted troopers, including the African-American Ninth and Tenth cavalries and the Rough Riders commanded by Lt. Col. Theodore Roosevelt went up against Kettle Hill while the forces led by Brigadier General Jacob Kent charged up San Juan Hill and pushed Spanish troops further inland while inflicting 1,700 casualties. The battle call was REMEMBER THE MAINE....

Representatives of Spain and the United States signed a peace treaty in Paris on December 10, 1898, which established the independence of Cuba, ceded Puerto Rico and Guam to the United States, and allowed the United States to purchase the Philippines Islands from Spain for $20 million. The war had cost the United States $250 million and 3,000 lives, of whom 90% had perished from infectious diseases.
​
The victorious United States emerged from the war a world power with far-flung overseas possessions and a new stake in international politics that would soon lead it to play a determining role in the affairs of Europe. 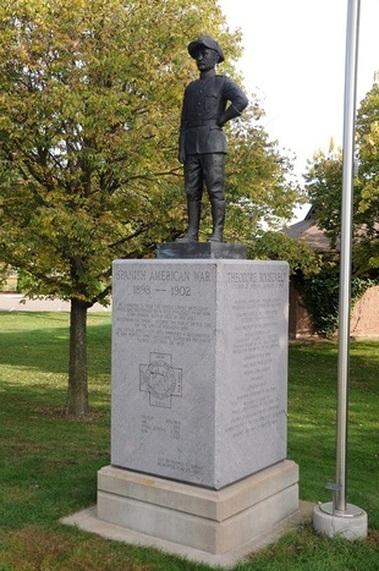 Click the image to read more
The Spanish–American War
From Wikipedia, the free encyclopedia

was a conflict in 1898 between Spain and the United States, the result of American intervention in the Cuban War of Independence. American attacks on Spain's Pacific possessions led to involvement in the Philippine Revolution and ultimately to the Philippine–American War.[8]

Revolts against Spanish rule had occurred for some years in Cuba. There had been war scares before, as in theVirginius Affair in 1873. In the late 1890s, American public opinion was agitated by anti-Spanish propaganda led by journalists such as Joseph Pulitzer and William Hearst which used yellow journalism to criticize Spanish administration of Cuba. After the mysterious sinking of the American battleship Maine in Havana harbor, political pressures from theDemocratic Party and certain industrialists pushed the administration of Republican President William McKinley into a war he had wished to avoid.[9] Compromise was sought by Spain, but rejected by the United States which sent an ultimatum to Spain demanding it surrender control of Cuba. First Madrid, then Washington, formally declared war.[10]
Remember The Maine 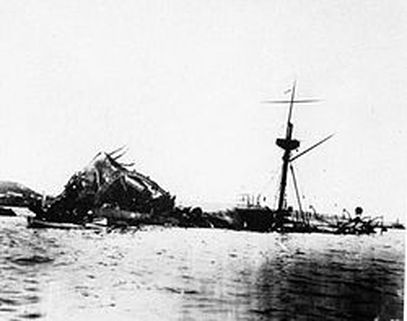 Click the picture to learn more
Eleven days after the Cuban autonomous government took power, a small riot erupted in Havana. The riot was thought to be ignited by Spanish officers who were offended by the persistent newspaper criticism of General Valeriano Weyler’s policies.[35]McKinley sent the USS Maine to Havana to ensure the safety of American citizens and interests.[35]

The need for the U.S. to send Maine to Havana had been expected for months, but the Spanish Government was notified just 18 hours before its arrival, which was contrary to diplomatic convention. Preparations for the possible conflict started in October 1897, when McKinley arranged for Maine to be deployed to Key West, Florida,[35] as a part of a larger, global deployment of U.S. naval power to attack simultaneously on several fronts if the war was not avoided. As Maine left Florida, a large part of the North Atlantic Squadron was moved to Key West and the Gulf of Mexico. Others were also moved just off the shore of Lisbon, and still others were moved to Hong Kong.[36]

At 21:40 on February 15, 1898, Maine sank in Havana Harbor after suffering a massive explosion. While McKinley preached patience, the news of the explosion and the deaths of 266 sailors stirred popular American opinion into demanding a swift belligerent response. McKinley asked Congress to appropriate $50 million for defense, and Congress unanimously obliged. Most American leaders took the position that the cause of the explosion was unknown, but public attention was now riveted on the situation and Spain could not find a diplomatic solution to avoid war. It appealed to the European powers, all of whom advised Spain to back down and avoid war.

The U.S. Navy’s investigation, made public on March 28, concluded that the ship’s powder magazines were ignited when an external explosion was set off under the ship’s hull. This report poured fuel on popular indignation in the U.S., making the war inevitable.[37] Spain’s investigation came to the opposite conclusion: the explosion originated within the ship. Other investigations in later years came to various contradictory conclusions, but had no bearing on the coming of the war. In 1974, Admiral Hyman George Rickover had his staff look at the documents and decided there was an internal explosion. A study commissioned by National Geographic magazine in 1999, using AME computer modelling, stated that the explosion could have been caused by a mine, but no definitive evidence was found.[38]