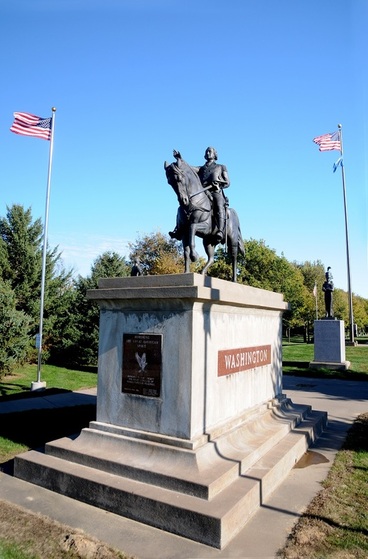 Click the image to enlarge
George Washington
From Wikipedia, the free encyclopedia

Our First Great General
Washington was born into the provincial gentry of Colonial Virginia; his wealthy planter family owned tobacco plantations and slaves. After both his father and older brother died when he was young, Washington became personally and professionally attached to the powerful William Fairfax, who promoted his career as a surveyor and soldier. Washington quickly became a senior officer in the colonial forces during the first stages of the French and Indian War. Chosen by the Second Continental Congress in 1775 to be commander-in-chief of the Continental Army in the American Revolution, Washington managed to force the British out of Boston in 1776, but was defeated and almost captured later that year when he lost New York City. After crossing the Delaware River in the dead of winter, he defeated the British in two battles, retook New Jersey and restored momentum to the Patriot cause.

Because of his strategy, Revolutionary forces captured two major British armies at Saratoga in 1777 and Yorktown in 1781. Historians laud Washington for his selection and supervision of his generals, encouragement of morale and ability to hold together the army, coordination with the state governors and state militia units, relations with Congress and attention to supplies, logistics, and training. In battle, however, Washington was repeatedly outmaneuvered by British generals with larger armies. After victory had been finalized in 1783, Washington resigned as Commander-in-chief rather than seize power, proving his opposition to dictatorship and his commitment to American republicanism.
more on general washington here 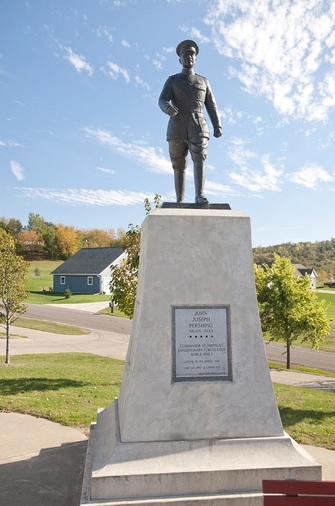 (September 13, 1860 – July 15, 1948), was a general officer in the United States Army who led the American Expeditionary Forces in World War I. Pershing is the only person to be promoted in his own lifetime to the highest rank ever held in the United States Army--General of the Armies (a retroactive Congressional edict passed in 1976 promoted George Washington to the same rank but with higher seniority[1]). Pershing holds the first United States officer service number (O-1).

He was regarded as a mentor by the generation of American generals who led the United States Army in Europe during World War II, including George C. Marshall, Dwight D. Eisenhower,Omar N. Bradley, and George S. Patton. 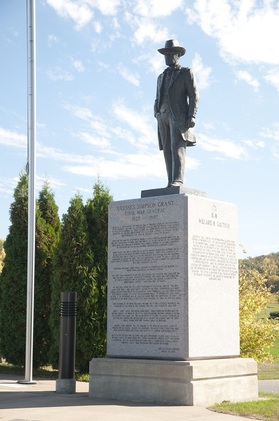 Ulysses S. Grant (born Hiram Ulysses Grant; April 27, 1822 – July 23, 1885) was the 18th president of the United States (1869–1877) following his success as military commander in the American Civil War. Under Grant, the Union Army defeated the Confederate military; the war, and secession, ended with the surrender of Robert E. Lee's army at Appomattox Court House. As president, Grant led the Radical Republicans in their effort to eliminate vestiges of Confederate nationalism and slavery, protect African American citizenship, and defeat theKu Klux Klan. In foreign policy, Grant sought to increase American trade and influence, while remaining at peace with the world. Although his Republican Party split in 1872 as reformers denounced him, Grant was easily reelected. During his second term the country's economy was devastated by the Panic of 1873, while investigations exposed corruption scandals in the administration. The conservative white Southerners regained control of Southern state governments and Democrats took control of the federal House of Representatives. By the time Grant left the White House in 1877, his Reconstruction policies were being undone.
More on general grant here

Dwight David "Ike" Eisenhower October 14, 1890 – March 28, 1969) was the 34th President of the United States from 1953 until 1961. He was a five-star general in the United States Army during World War II and served as Supreme Commander of the Allied Forces in Europe; he had responsibility for planning and supervising the invasion of North Africa in Operation Torch in 1942–43 and the successful invasion of France and Germany in 1944–45 from the Western Front. In 1951, he became the firstsupreme commander of NATO.[2]

Eisenhower was of Pennsylvania Dutch ancestry and was raised in a large family in Kansas by parents with a strong religious background. He attended and graduated from West Pointand later married and had two sons. After World War II, Eisenhower served as Army Chief of Staff under President Harry S. Truman then assumed the post of President at Columbia University.[3]

Eisenhower entered the 1952 presidential race as a Republican to counter the non-interventionism of Senator Robert A. Taft and to crusade against "Communism, Korea and corruption". He won by a landslide, defeating Democrat Adlai Stevenson and ending two decades of the New Deal Coalition. In the first year of his presidency, Eisenhower deposed the leader of Iran in the 1953 Iranian coup d'état and used nuclear threats to conclude the Korean War with China. 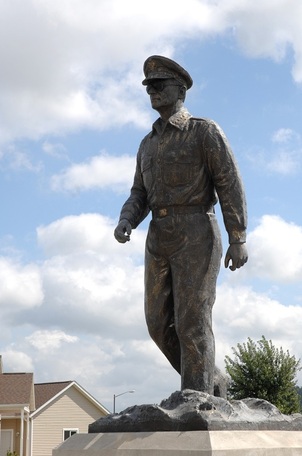 Click the image to enlarge
General Douglas MacArthur
From Wikipedia, the free encyclopedia

General of the Army Douglas MacArthur (26 January 1880 – 5 April 1964) was an American general and field marshal of the Philippine Armywho was Chief of Staff of the United States Army during the 1930s and played a prominent role in the Pacific theater during World War II. He received the Medal of Honor for his service in the Philippines Campaign, which made him and his father Arthur MacArthur, Jr., the first father and son to be awarded the medal. He was one of only five men ever to rise to the rank of General of the Army in the U.S. Army, and the only man ever to become a field marshal in the Philippine Army.

Raised in a military family in the American Old West, MacArthur wasvaledictorian at the West Texas Military Academy, and First Captain at the United States Military Academy at West Point, where he graduated top of the class of 1903. During the 1914 United States occupation of Veracruz, he conducted a reconnaissance mission, for which he was nominated for the Medal of Honor. In 1917, he was promoted from major to colonel and became chief of staff of the 42nd (Rainbow) Division. In the fighting on the Western Front during World War I, he rose to the rank of brigadier general, was again nominated for a Medal of Honor, and was awarded the Distinguished Service Cross twice and the Silver Star seven times.
From 1919 to 1922, MacArthur served as Superintendent of the U.S. Military Academy at West Point, where he attempted a series of reforms. His next assignment was in the Philippines, where in 1924 he was instrumental in quelling the Philippine Scout Mutiny. In 1925, he became the Army's youngest major general. He served on the court martial of Brigadier General Billy Mitchell and was president of theAmerican Olympic Committee during the 1928 Summer Olympics in Amsterdam. In 1930, he became Chief of Staff of the United States Army. As such, he was involved in the expulsion of the Bonus Armyprotesters from Washington, D.C. in 1932, and the establishment and organization of the Civilian Conservation Corps. He retired from the U.S. Army in 1937 to become Military Advisor to the Commonwealth Government of the Philippines.
more on general macarthur here 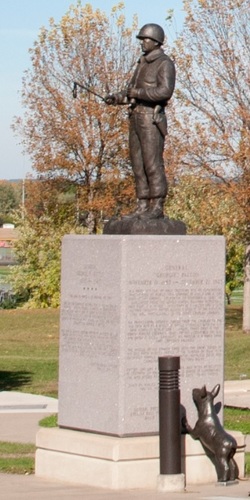 Born in 1885 to a privileged family with an extensive military background, Patton attended the Virginia Military Institute, and later the U.S. Military Academy at West Point. He participated in the 1912 Olympic Modern Pentathlon, and was instrumental in designing the M1913 "Patton Saber". Patton first saw combat during the Pancho Villa Expedition in 1916, taking part in America's first military action using motor vehicles. He later joined the newly formed United States Tank Corps of the American Expeditionary Forces and saw action in World War I, first commanding the U.S. tank school in France before being wounded near the end of the war. In the interwar period, Patton remained a central figure in the development of armored warfare doctrine in the U.S. Army, serving on numerous staff positions throughout the country. Rising through the ranks, he commanded the U.S. 2nd Armored Division at the time of the U.S. entry into World War II.