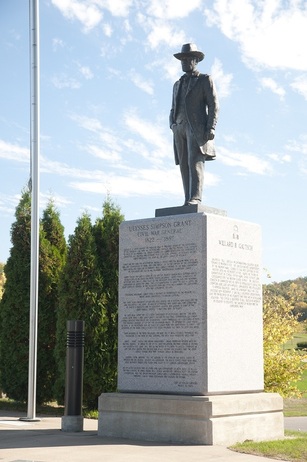 Ulysses S. Grant (born Hiram Ulysses Grant; April 27, 1822 – July 23, 1885) was the 18th president of the United States (1869–1877) following his success as military commander in the American Civil War. Under Grant, the Union Army defeated the Confederate military; the war, and secession, ended with the surrender of Robert E. Lee's army at Appomattox Court House. As president, Grant led the Radical Republicans in their effort to eliminate vestiges of Confederate nationalism and slavery, protect African American citizenship, and defeat theKu Klux Klan. In foreign policy, Grant sought to increase American trade and influence, while remaining at peace with the world. Although his Republican Party split in 1872 as reformers denounced him, Grant was easily reelected. During his second term the country's economy was devastated by the Panic of 1873, while investigations exposed corruption scandals in the administration. The conservative white Southerners regained control of Southern state governments and Democrats took control of the federal House of Representatives. By the time Grant left the White House in 1877, his Reconstruction policies were being undone.
During the siege, Grant coordinated a series of devastating campaigns launched by generals William Tecumseh Sherman, Philip Sheridan, and George Henry Thomas in other theaters. Finally breaking through Lee's trenches, the Union Army captured Richmond in April 1865. Lee surrendered his depleted forces to Grant at Appomattox as the Confederacy collapsed. Most historians have hailed Grant's military genius, despite losses of men.[1]

After the Civil War, Grant served two terms as president and worked to stabilize the nation during the turbulent Reconstructionperiod that followed. He enforced civil rights laws and fought Ku Klux Klan violence. Grant encouraged passage of the Fifteenth Amendment, giving protection for African-American voting rights. He used the army to build the Republican Party in the South, based on black voters, Northern newcomers ("Carpetbaggers"), and native Southern white supporters ("Scalawags"). As a result, African-Americans were represented in the Congress for the first time in American history in 1870. Although there were some gains in political and civil rights by African Americans in the early 1870s, by the time Grant left office in 1877, Democrats in the South had regained control of state governments, while most blacks lost their political power for nearly a century. Although Grant's Indian peace policy reduced Indian violence and created the Board of Indian Commissioners, conflict continued that culminated in theBattle of the Little Big Horn. In the long run, even his supporters agreed that his policies were unsuccessful. Grant's reputation fell as the economy plunged into the United States' first industrial depression, called the Panic of 1873. In his second term, Grant had to respond to a series of Congressional investigations into financial corruption in the government, including bribery charges against two cabinet members.

Grant's foreign policy, led by Secretary of State Hamilton Fish, settled the Alabama Claims with Britain and avoided war with Spainover the Virginius Affair, but his attempted annexation of the Dominican Republic failed. Grant's response to the Panic of 1873 gave some financial relief to New York banking houses, but was ineffective in stopping the five-year industrial depression that followed. After leaving office, Grant embarked on a two-year world tour that included many enthusiastic receptions. In 1880, he made an unsuccessful bid for a third presidential term. However, his memoirs, written as he was dying, were a critical and popular success, and his death prompted an outpouring of national mourning. Historians have, until recently, ranked Grant as nearly the worst president; Grant's reputation was marred by his defense of corrupt appointees and by his conservative deflationary policy during the Panic of 1873. [2] While still below average, his reputation among scholars has significantly improved in recent years because of greater appreciation for his commitment to civil rights, moral courage in his prosecution of the Ku Klux Klan, and enforcement of voting rights.[3]